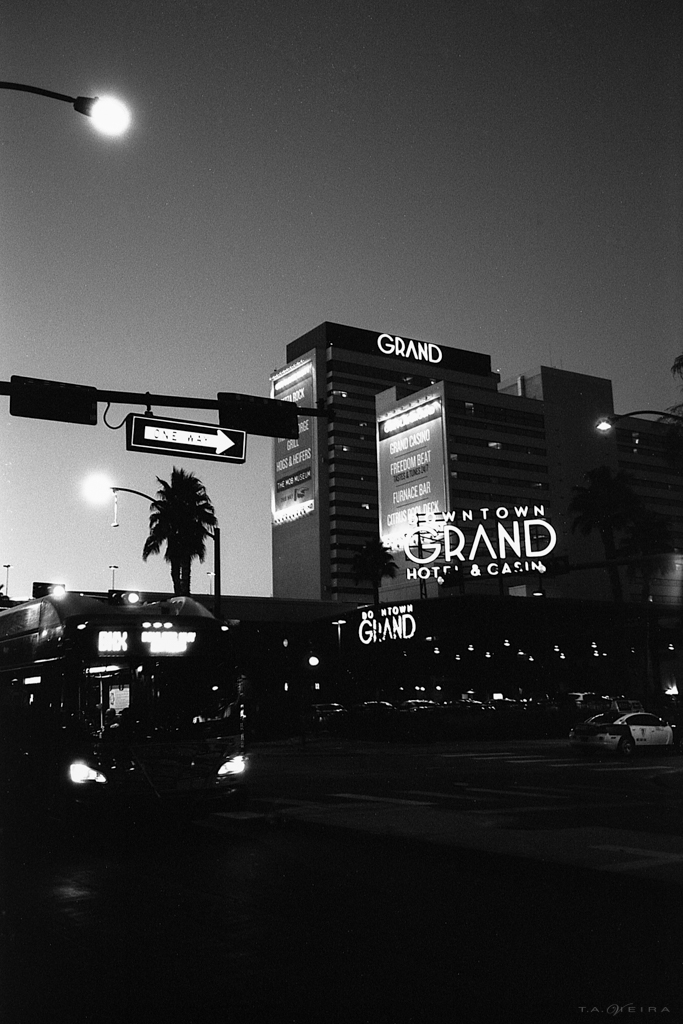 I’ve been making a point of going out to shoot about a half hour before sunset. It’s not that I mind shooting during the day. Actually having good light is pretty refreshing when I’m so used to shooting more after the sun goes down (which I love). But my favorite scenes lately have been just before twilight, when there is still just a bit of light left in the sky, but plenty of rich shadows, and of course thats the time when the lights come on. More contrast, more mood.

On the evening that I shot this photo, I had arrived downtown at the right time, just minutes before sunset. That gave me time to park the car and head over to this location. I had been thinking about it for a couple days. The Grand Hotel.

I’ve photographed the Grand when I’ve been downtown at night, well after the sun had gone down. But particularly when shooting film a little too much detail was lost. I wanted to get down there early enough so I could capture the silhouette of the hotel’s structure with still enough light to help it stand out, but late enough to get those shadows and lights.

The Real Reason I was Even There

My main reason for going out shooting on this particular night was that I wanted to do some shooting with a new digital camera, a Leica M typ 262 and see how I liked it’s images compared to film. But, I knew that I also had one more shot on the roll of Acros that was currently in my film camera, so I figured I’d go ahead and get one shot of the hotel on film, then finish the rest of the night shooting digital.

When I arrived on the corner where I wanted to frame the shot, the light was perfect, the sky was perfect, the lights on the hotel were perfect. And the best part… a city bus had just started to drive into the scene. I wanted to get that shot before anything changed. I wanted to make sure I got the photo before the bus had advanced too far into the scene, obstructing the lower part of the hotel. I quickly raised my film camera; used the settings that were already set; focused the best I could and took the shot.

Now I knew that my camera’s settings already included open aperture (f2) and a slow shutter speed, probably around 1/30sec. That’s not too bad, but when trying to move quickly, 1/30sec might give you a bit of camera shake blur in the image. Motion blur is cool, but camera shake blur… not so cool.

Anyway, I kind of was doubtful that the shot would come out. I was more than certain there would be some camera shake involved, or maybe my exposure might not be quite right since I hadn’t had the time to meter the scene. So yeah, I was a little doubtful, but of course always hopeful. That’s one of the exciting things about shooting with film. You can have a pretty good idea of what you’re getting while you’re shooting, but there’s always room for the element of surprise (both good and bad). That’s one emotional aspect that you don’t get shooting digital.

So I developed the film the next day. Of course one of the images I was most anxious to see was the last shot on the roll, the shot of the Grand Hotel.

Needless to say, I was pleasantly surprised. The shot worked out and I was really happy with what I got.

After I had taken that last shot on the roll of film I continued to take the same shot with the digital camera. I got a few images that came out nice, and actually shows much more shadow detail and sharpness than you see in the film photo above. But to me, none of the digital images quite captured the mood and character of the scene the way the film version does.