Vegas Noir – that term comes from a Facebook comment by one of my friends and wonderful photographer, Anthony Pond. Anthony was referring to the style of night shots I’ve been producing a lot. These shots usually show moody, high contrast scenes from the downtown Vegas area; often featuring the neon and lights of Fremont Street casinos and hotels; or often an abandoned alley or two.

I do love Noir. I love watching Film Noir movies from the twentieth century. So much of the human condition is exposed in the shadows and selectively lit scenes of those films. I’ve always been drawn to that look, that feel and have wanted to incorporate those elements into my own photography, but since I’ve moved from shooting digital to shooting with film, that focus on Noir has definitely increased.

The thing that really makes me love shooting those kinds of scenes with film is because the photo will often still leave much to the imagination. If I shot the same scene with a digital camera, man, everything would be visible. With digital, there a better chance that every detail of the shot would have some level of visibility. Of course you could process and edit the file in post to deepen the shadows, give more emphasis to your subject, but with film it happens naturally; organically in a way that I don’t think is quite as believable with digital. 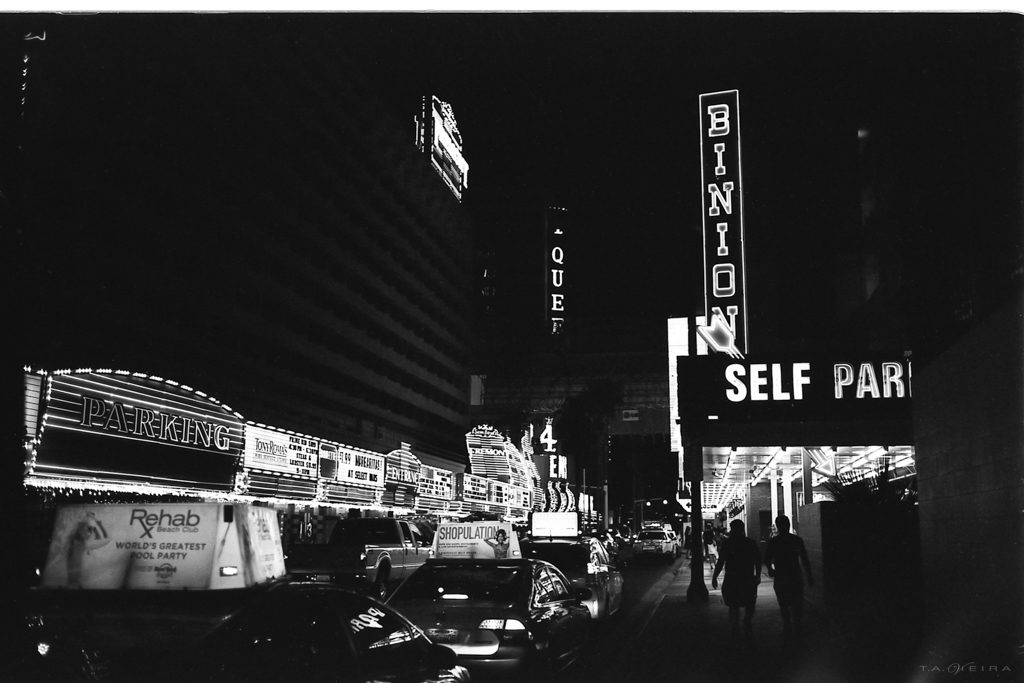 I watched an episode of Ted Forbe’s YouTube channel, The Art of Photography, in which Ted was discussing what it might be like if someone like Henri Cartier-Bresson was alive today and posting on Instagram. Would he be as popular today as he has become over the decades. Would he still shoot film or use a more contemporary digital camera. Ted made the true statement that the Masters of Photography from the 20th century were photographers of their time. That’s an important statement. These photographers were using the best and most modern cameras of their day. They weren’t trying to use gear that was 60 years old (like I do). Given that info, someone like Cartier-Bresson might be shooting with a Fuji or Sony today; utilizing and taking advantage of every new feature the new technology of these cameras have to offer. I think that’s very possible, even probable. There’s still a part of me that thinks maybe these iconic photographers from the past may still have the realization that was forced upon them by their low-tech equipment; that it’s the photographer that takes the shot; it’s the vision, not the gear; it’s what’s in the photo and not what you can do to it because of tech that makes the strong photo; limitations can be blessings and often less is more…. Okay, starting to sound a bit “Soap-Boxy” here so I’ll step down.

Having said all that, when it comes to any client work I do, although I do try to keep the gear to a minimum, I do need and take advantage of the technology available to me today. That tech enables me to get the shots the client needs and in a reasonably short amount of time. I’m very grateful for that. However, when it comes to my personal work I pretty much abandon that way of thinking. I am using cameras that are 20, 30, 40 and yes, even 60 years old to take most of the photographs I’m making these days. I will purposefully shoot older things, older cars, buildings, etc…  and loving it when I develop the film, see the photo and say to myself, “Man, this could’ve been taking in the ’50s!” And I’ll love that! Do you think HCB would’ve been excited for such a vintage look? Do you think he might’ve looked at one of his photos and said, “Man, this looks like it was taken in 1901! Man, that’s awesome!”? Probably not, huh.

So, as I go further with my photography, it seems like in a way I’m actually going in a direction that more resembles the past, rather than the future of photography. That may seem a little counter productive, but what can I say. To quote Emily Dickinson (or Selena Gomez, your choice), “The heart wants what it wants.” I guess I’m trying to incorporate aspects I love from the photography of the past with present day content. Maybe that might help to add a bit of timeless quality to the photos, or maybe not.

Anyway, this post was really just me thinking out loud.